The earliest Assyrian Gramophone (shellac) records in Middle East were released in Iraq, this was during the time when international record companies were working and producing records for different nationalities and in different languages. The two main companies were the British “His Master’s Voice” and The American “Columbia” Labels, later a local company (Ashtarphone) produced at least two Assyrian records that we know of, and I will be showing those two records at the end of this article.

Other domestic and regional labels gradually became involved in producing records in the Middle East, however Assyrian songs have only been found on the two international Labels mentioned above.

But political instability, and revolutions put an end to such collaborations. These political changes brought Pan-Arab nationalism and dictatorships which resulted in the persecution of minorities not only politically but culturally. Even when domestic record companies were established they never ventured to produce record for Assyrian Singers, companies like Chakmakchiphon, Neayem, Baidaphon and Philips.

None of the Middle Eastern regimes allowed Assyrians to have their own Social Media, be it Newspapers, Magazines, Radio or TV channels. And no schools to teach their language, and as a result of that, and other suppression, today most of our people don’t read and write in their own language. The only source of Media that governments tried but couldn’t totally block was Assyrian songs. Assyrian albums kept arriving one way or the other from the West to the East, and Assyrian songs kept filtering into our social life.

I will start with the first record, this record was released in Iraq in 1931 by Shamasha (deacon of the Catholic Church) Hanna Petros, (1896-1958), he released two Gramophone records (78rpm), on the British “His Master’s Voice’ Label, one was called “Baydakh d-Ature” G.D 89, and the other “Karuzuta d-Hasha” G.D 111, as you notice from the titles, the first record contained two magnificent national songs, and the second record had two Church Hymns. These two records were pressed at the plant in England UK.

Hanna Petros was not only a deacon, a singer but a composer, and the founder of music education in Iraq, which included (but not limited to) the Iraqi Army Music Department (1923), the Baghdad Music Conservatory (1936) and the Iraqi Police Music Band (1941).

The second oldest records were released by Gabriel Yosip Sayad (1914 – 1995), Gibrail was only a teenager when he was overwhelmed by the news of the 1933 Simmele Massacre of Assyrians at the hands of Iraqi military factions. Gibrail’s patriotism did not drive him to take arms against the persecutors of his people, yet his choice of weapon was more powerful. The words and songs he chose united and compelled the Assyrian Community in Iraq to survive the Iraqi regime’s merciless persecution of Gibrail’s people. He dared to raise his rich tenor voice on stage and, finally, in recordings of ten songs, Including four very patriotic songs written by famous composers: Dr. Freydoun Atouraya and Rabi Yacoub Bet Yacoub. (from his bio by Ramsina Sayad)

Gabriel released Five records on the British owned “His Master’s Voice” Label. it hasn’t been easy locating all five original records, especially that many of the copies have not survived, or are in the hands of none-Assyrian collectors. These records were pressed at Dum Dum plant in Culcatta, India and shipped to be sold in Iraq. On this track you will hear a short sound bite from an interview with the late Gabriel Yosip Sayad, conducted in 1986 for an Assyrian radio program in Sydney, as he introduces the song “Ya Nishra” which was recorded in Iraq on this record below in 1935. The third oldest Assyrian record from Iraq was recorded by Yonathan Yukhanna, He released only one record in 1948, and it was released on Columbia record label, Numbered GIA. 41 (c.o.f 290), and the record was pressed in England UK. No photo has been located for this singer. The two tracks on record were titled: Oshana Youel Mirza is considered the first Assyrian popular singer and the most influential during his time, most of our legend singers were inspired and influenced by his voice and songs. Ashtarphone record company was owned and operated by the Bashir family in Baghdad, they later changed their name to Bashirphone when Jamil Bashir took over the running of the company. Bashir family are famed for their mastering of the UD in both the making and playing, both Munir and Jamil were masters of the instrument. But only Jamil was involved in recording and releasing records for various Iraqi Minorities and Arabs.

These two gramophone records were released by Oshana Youel Mirza on Ashtarphone probably in 1958 or earlier. Later Bashirphone only released Vinyl records. Both records were pressed in Pakistan and then shipped to be sold in Iraq. Those have been the only Shellac records that we have been able to find in Iraq. But our search continues and maybe one day we will find more, it has been said that even late Biba or Albert Ruel may have at one time recorded songs on Gramophone records, but nothing has been found yet.

*As information, photos and songs collected in my archive for many years are gathered from many different sources, I would like to thank and acknowledge everyone who has helped me over the years, and for those who have given permission to use some of their information in my articles, and also for those who have refused. But one hand can’t clap. 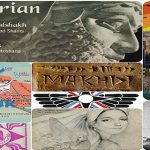