Album covers are an opportunity for singers to make a first impression. The artwork could tell the story of songs and music style in the album, but not necessary, it could just be making an important statement.
But most of our Assyrian covers lack artistic vision, and are mundane and unexciting. I would understand if a new singer uses his own photo on cover, as a gateway to introduce himself to the masses, but what I don’t understand is when after the 10th or 11th album the singer is still only using his or her profile photo on the cover, without any montage or creativity?

Other annoying covers to me are those with singers being shown playing or holding a music instrument on cover; but that instrument is never used in the actual album!

Album covers could be used as a medium to reflect the emotion and tragedies of our nation at a specific period of time in history. The Massacres, The Terrorist attacks, The occupation of Nineveh, The forced deportation, The Genocides, the burning of Churches. But it doesn’t have to be a political statement, it could make a statement about life in general, about Romance, Love, Relationship, Friendships and so on.

As the saying goes “A picture is worth a thousand words”, I believe few singers have over the years tried to tell a thousand worthy words with some of their album pictures, or at least twenty words! But I guess that’s better than not trying at all. Here are my picks of such covers with statements:

Perhaps the most iconic Assyrian album cover has been this by Walter Aziz, released in 1982 as his volume (7) album. The cover depicts the immortal Assyrian General Petros Elia, colored from a black and white photo depicting him in his full military uniform and medals. General Agha Petros was the military leader of the Assyrian independent forces during World War One, fighting for the establishment of an Assyrian homeland in their ancestral land of Mesopotamia. Album was dedicated to his memory, perhaps the last king of Assyria. This album with his iconic cover was released by Shlimon Bet Shmuel in 1983 on an LP, painted by Adell Nagi, depicting the never-ending struggle for survival, a struggle that continue to this day; the looting of our artifacts, the forced deportation and migration of our people from their ancestral homeland, the destruction of our heritage and identity. Shlimon is a remarkable composer and nationalist singer, his songs encapsulates all the worries and inspirations of his people.

The impressive image of an Assyrian winged bull adorn this LP cover, the debut album by Sargon Rasho released in 1982 designed by Edward Gabriel, while being his first album yet the singer didn’t use his own photo on cover, but opted for one majestic photo that summaries the power and glory of the Assyrian Empire, simple but effective. and sent a strong message that you don’t need to always use your own photo on cover, even if its your debut album. Elizabeth Oshana released this LP in 1981 in US, with this pose she is paying tribute to her national identity and to her first track in her album “the awakening”, her dress is adorned with the image of the national Assyrian flag, and holding a flame, a beacon of hope. Of course such covers never arrived from the west to middle East as they were banned by the Arab national regimes, that tells you the power of an image. LP album by William Daniel released in 1974 pressed in USA, Music composed by William Daniel, titled “Assyria Sings”, William opted to use a painting on the back, name of painter is not clear but might be Shan Toma, it depicts the spinning “yarn” wheel in the center of the image, the background shows the Gate and walls of Nineveh, and threads of fiber shooting from wheel to all directions, the “wheel” symbolizing civilization. Baby cradle representing the very first song of a mother to her child, and the unbroken lineage from the ancient to modern Assyrians, the continuity of people and their culture, dance and music has always been part of our struggle and survival.

This CD was released by the late Hannibal Alkhas, featuring Helen St. Vincent and Khosrow Soltani. This poems, Songs and instrumental album was released in 2005 and the cover was designed from the paintings of Late Hannibal Alkhas, an accomplished painter and poet. the album was titled Urmie, the cover depicts a panorama of the life of Assyrians in the Urmie region of Iran, before the Massacres and Genocides. Mousa Elias released this CD in 2001 with national songs. The cover depicts the tragedies of SAYFO: The World War One Genocide committed by the Turkish government against the country’s Christian inhabitants. Sayfo: meaning “Sword” in Assyrian, represents Turkish army and Kurdish tribes use of the Sword during their “jihad” to butcher civilians while invading cities and villages to rape, plunder and kill unarmed Christians of the Ottoman empire, a tragedy that it will live in infamy.

Azadoota Band (Freedom): is an Assyrian international band with at least seven members, located in Sydney Australia, Robin Zirwanda is the band’s manager and singer, and he is also the son of the famed Assyrian Iraqi singer Awimalk Haider. This album was released in 2015 with a single song titled Lishana (Our language), telling the world that Jesus spoke our language. With a beautifully designed cover looking like an ancient illuminated Manuscript. Another worthy mention is this poetry CD released by Yousip Menashi in 2006 in Sydney Australia, titled “Kela Yema”, cover was decorated with two paintings both originally painted by the Assyrian artist Edward Rassam, with some modifications to original paintings. Helen Zaya released this CD in 1999 with a cover adorned by a painting and some graphic design, album was titled Bet Nahrein, and showing the map of our ancestral homeland Iraq “or part of Mesopotamia” in the center of the world. Painted in blood red, and one chained female holding a flame, while the other male figure is holding an Assyrian flag and has freed his hand but with sacrifices, represented in the drops of blood dripping from the chain. In my opinion such covers add value to albums, if I was in the shop and saw such a nice cover, I would be so motivated to buy it.

George Farag released this Tape in 1986 in Germany, holding Assyrian flag over the ruins of ancestral homeland with mother and child in traditional dress. Assyrian struggle to survive against savage odds in a region that has never stops persecuting his indigenous people, the Middle East the home of death and misery. Ninos Nirary released this Poetry Tape in 1993 titled “Message – Agarta”, you can always say so much with a painting than a straightforward photo, while I didn’t have a good quality scan of this cover but I think it is still a good representation of my point in this post, covers that are utilized to send or illustrate a powerful message of what the content of the album are, but also are informing the listeners visually and emotionally of our political struggle.

PS: To keep the sounds authentic, all tracks used on this page have been recorded directly from the original first edition records, either be it Vinyl, Tapes or CDs. And have not used remastered versions. 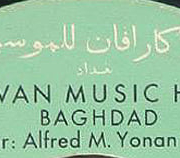 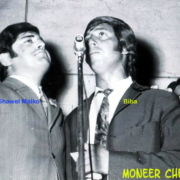