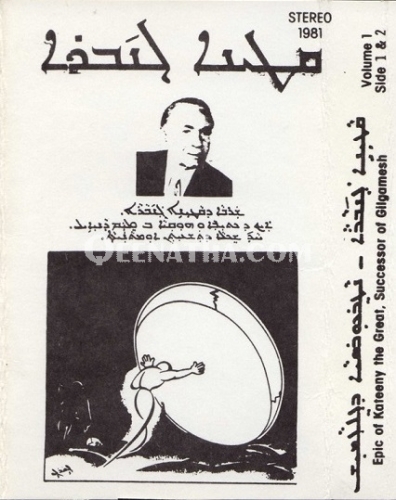 Qatine is an epic song that has been orally maintain and preserved by the Assyrians from generation to generation, and it is part of a great folkloric literature that attests to the rich Assyrian heritage.

Zmarta D’Qatine as it is usually known is part narrative and part song and it is relayed by a bard that is usually either an old man or women. It is sometimes sung by mothers and grandmothers to put babies to sleep, and it is also sung by school children who grew up hearing it. Zmarta D’Qatine’s popularity was spread across a wide geographical area, from Nineveh plains to Urmi, and Hakkari.

Rabi William Daniel is notably recognised as the first redactor of this great epic, he wrote his version of Qatine Gabbara in over 6000 couplets and published them in three volumes. Despite the fact that he based his version (which is correctly noted as one of the great works of modern eastern Assyrian literature) on the orally maintained version as heard in Urmi but his version has very little in common with the original Zmarta D’Qatine as narrated and sung by the Assyrian bards in Assyrian villages throughout the above mentioned areas. However, one can easily spot some lines and expression not to mention syntax and choice of vocabulary that are certainly borrowed from the traditional oral version and Rabi William himself does not hide this bbut makes it clear in his introduction to the first volume.

The Assyrian genocide and the forced evacuation of the Assyrians in the 20th century, and the continuous persecution of the Assyrians coupled with the fact that the social and economic infrastructure of purely Assyrian areas within the modern states of Iraq, Syria, Iran and Turkey are neglected by their respective governments, led to a mass and repetitive migration of the Assyrians from their millennia old settlements. This has affected the organic growth and maintenance of Assyrian folklore in general and the preservation of such great oral literature as Zmarta D’Qatine. Unfortunately some Assyrians that migrated from their original areas became urbanised and slowly formed a social class of their own that saw itself superior to the rural Assyrians. This superiority complex also manifested itself in looking down at anything that was remotely associated with the Assyrian villages and their rural culture. This marked a break in the maintenance of great oral traditions along with other definitive cultural marks. Thus creating a situation where parents were unable to relay their oral culture to their children for now their urbanised children perceived this culture as part of the rural culture which they construed as primitive.

It is only now that some Assyrian youth are recognising the value of this valuable heritage, and are eager to scrutinize this oral literature and tradition, and subject it to scholarly and literary criticism. This has naturally called for an urgent need of fully documenting Zmarta D’Qatine. This has now become a necessity, and through this group we appeal and call to all of our Assyrian community and every individual to assist this group by searching within their area they currently live for any person that may know anything about Zmarta D’Qatine, and to kindly record them with the best recording systems at their disposal, and making their recordings available for this group.

Of course it would be wonderful if you could have people that may know the entire Zmarta D’Qatine which is said to usually take a bard over three to four nights in order to relay it to her/his audience. However, it would be great even if you could record individuals that may only know some short parts of it because this may still make it possible to compile the entire full original version from these short parts which you would kindly record for us. Think of a puzzle where every piece is valuable and necessary to form the entire puzzle.

We are confident that you would help to gather what is left of this great oral heritage with the hope that together we might just be able to preserve its full version.

Please lobby your friends to join this group and help in this great Assyrian venture. (ps: the group is on fb: Zmarta D'Qatine).
For further information please do not hesitate to contact me directly at [email protected] , and please do also email us your recording or post your recording for us on the following address:


Moneer Cherie © Qeenatha.com
Please if you are using these tracks from our site, give credit to Qeenatha.com